Secure your spot and get started today with our EXCLUSIVE offer!

By opting into the web form above you are providing consent for Full Circle Dojang to send you periodic text messages. Standard rates may apply. You can reply HELP at anytime or learn more. You may opt-out anytime by replying STOP.
ACCESS OUR SCHEDULE
& EXCLUSIVE WEB SPECIAL

Secure your spot and get started today with our EXCLUSIVE offer!

By opting into the web form above you are providing consent for Full Circle Dojang to send you periodic text messages. Standard rates may apply. You can reply HELP at anytime or learn more. You may opt-out anytime by replying STOP.

Best martial arts school in the area! Master Charles Jackson and his team of Certified instructors are top notch with training. Master Jackson is not only a great instructor but a mentor to the children and young adults of Full Circle Dojang. My daughters have been attending classes there for 2 1/2 years now and just can't get enough. I myself have finally started going to classes. I would recommend the adult classes for anyone who loves martial arts or just wants to get in better shape. The best part of Full Circle Dojang is they treat you like FAMILY!!

Fantastic program for kids to develop into confident productive citizens. Almost 4 years in with our oldest and our 4 year old just joined. Mr. Jackson provides the path and structure to make his students goal driven go getters.
Thank you!

From the minute you meet Charles you know that he is super passionate about his work and the kids he works with. He is developing strong, confident leaders for our future and should be revered for taking on such a huge task. If you haven't started your child in karate yet, what are you waiting for? Charles is the man!

What a great dojang!!!!My daughter feels like family here. Mr. Jackson and his instructors are committed to their students. Love the fact that my young daughter has the opportunity to train with female instructors who show her that girls can and do excel at martial arts. I️ simply love everything about Full Circle and would and have recommend it many a times. Thanks again guys/gals.

I can’t say enough good things about This school! Charles and Jean treat every student & their parents like family and every instructor is top notch! The confidence, strength & pride they have instilled in my daughter is invaluable and her love for this sport no doubt is in part to the atmosphere and instructors at Full Circle.

We are all aware that exercise generally has many benefits, such as improving physical fitness and strength. But what do we know about the effects of specific types of exercise? Researchers have already shown that jogging can increase life expectancy, for example, while yoga makes us happy.

However, there is one activity that goes beyond enhancing physical and mental health – martial arts can boost your brain’s cognition too.

Researchers say that there are two ways to improve attention, through attention training (AT), and attention state training (AST). AT is based on practising a specific skill and getting better at that skill, but not others – using a brain training video game, for example.

AST on the other hand is about getting into a specific state of mind that allows a stronger focus. This can be done by using exercise, meditation or yoga, among other things.

It has been suggested that martial arts is a form of AST, and supporting this, recent research has shown a link between practice and improved alertness. Backing this idea up further, another study showed that martial arts practice – specifically karate – is linked with better performance on a divided attention task.

This is an assignment in which the person has to keep two rules in mind and respond to signals based on whether they are auditory or visual.

In a US study, children aged between eight and 11 years old were tasked with traditional martial arts training that focused on respecting other people and defending themselves as part of an anti-bullying program. The children were also taught how to maintain a level of self-control in heated situations.

The researchers found that the martial arts training reduced the level of aggressive behavior in boys, and found that they were more likely to step in and help someone who was being bullied than before they took part in the training.

Significant changes were not found in the girls’ behavior, potentially because they showed much lower levels of physical aggression before the training than the boys did.

Interestingly, this anti-aggression effect is not limited to young children. A different piece of research found reduced physical and verbal aggression, as well as hostility, in adolescents who practiced martial arts too. 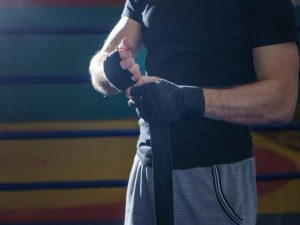 Some forms of martial arts, such as tai chi, place great emphasis on controlled breathing and meditation. These were strongly linked in one study with reduced feelings of stress, as well as being better able to manage stress when it is present in young to middle-aged adults.

This effect has also been found in older adults – the 330 participants in this research had a mean age of 73 – too. And the softer, flowing movements make it an ideal, low-impact exercise for older people.

In the study linked above, 45 older adults (aged 67-93) were asked to take part in karate training, cognitive training, or non-martial arts physical training for three to six months.

The older adults in the karate training showed lower levels of depression after the training period than both other groups, perhaps due to its meditative aspect. It was also reported that these adults showed a greater level of self-esteem after the training too.

After comparing a sedentary control group with a group of people doing karate, Italian researchers found that taking part in karate can improve a person’s working memory. They used a test that involved recalling and repeating a series of numbers, both in the correct order and backwards, which increased in difficulty until the participant was unable to continue.

The karate group was much better at this task than the control group, meaning they could recall longer series of numbers. Another project found similar results while comparing tai chi practice with “Western exercise” – strength, endurance and resistance training.

Evidently, there is far more to martial arts than its traditional roles. Though they have been practiced for self-defence and spiritual development for many hundreds of years, only relatively recently have researchers had the methods to assess the true extent of how this practice affects the brain.

Ashleigh Johnstone is a PhD researcher in cognitive neuroscience at Bangor University. This article was originally published on The Conversation (theconversation.com)

Check out our amazing classes.